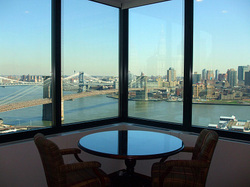 Our firm’s civil work has included successfully defending a high-ranking government official in major civil-rights litigation that arose out of the mass arrests and detention of Muslim men in the immediate aftermath of the September 11 terrorist attacks.  During the course of the litigation, the firm overcame a motion to quash by the New York Times in order to depose one of its reporters, and one of the cases included an interlocutory appeal to the United States Supreme Court.  In addition, the firm has been actively involved in commercial litigation and investigations relating to the real-estate-market meltdown and related financial crisis of 2008.

The firm’s principal, Raymond Granger, is a former federal and state prosecutor and law clerk to a federal district judge.  He has nearly 30 years of experience in the criminal- and civil-justice systems.  He graduated in 1984 from Northwestern University School of Law, where he was a member of the Law Review, and in 1981 from the University of Virginia, where he received a Bachelor of Arts Degree in Government with honors and was a member of the Dean’s List for all semesters.

Spearheaded by Mr. Granger’s legal expertise and experience and supported by a talented and motivated legal staff, Granger & Associates LLC dedicates itself wholeheartedly to protecting and vindicating the rights and interests of its clients.